The EU is the biggest economy on Earth. This means that it is in a strong position to negotiate free trade deals with other countries, benefiting British businesses. If Britain left the EU, we would not be in such a strong negotiating position.

As a member of the EU, Britain can get better free trade deals with other countries than we could alone. This is because the EU is the largest economy in the world. The EU can negotiate with the USA, China and India as an equal; Britain outside the EU could not.

EU membership helps Britain trade with the rest of the world. 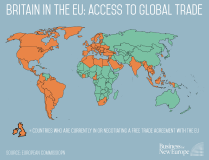 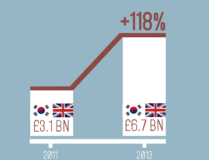 Graph of British trade with Korea 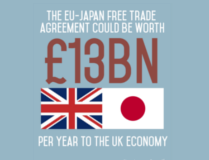 The EU has free trade agreements with big economies like South Korea, South Africa and Mexico. Britain now has a trade surplus with South Korea for the first time in 20 years, thanks to the EU trade agreement.

The EU is also negotiating new agreements. The TTIP deal with the United States could be worth £10 billion a year to the UK economy; the proposed EU-Japan deal could be worth £13 billion. Britain’s hand in these negotiations is much stronger because of our membership of the EU.