“This proves just how desperate UKIP are, they’re unable to debate the substance of the issues, instead resorting to bullying tactics” – Lucy Thomas, campaign director of Business for New Europe

The concerted campaign of intimidation against Sainsbury’s supermarkets is unacceptable and childish say pro-European campaigners. The UKIP MEP Steven Woolfe called on anti-Europeans to call the customer services line of Sainsbury’s supermarkets as a result of a news story on funding of the ‘in’ campaign. This was made worse by the fact that J Sainsbury have no involvement in the Europe debate. Pro-European business campaigners said this demonstrated just how desperate and irresponsible UKIP were:

“It is one thing to debate the issues like grown-ups, it is quite another to hound a company who has nothing at all to do with the ‘in’ campaign. It proves just how desperate UKIP are, they’re unable to debate the substance of the issues, instead resorting to bullying tactics. To make matters worse they have picked on a company who have nothing to do with any European issues.”

June 09, 2015 3:47 PM
Abandoning our place in Europe would threaten jobs, harm the economy and squeeze the life out of the NHS, say business leaders. Business for New Europe, the pro-European business campaign, was responding to the comments of James Hicks, MD of the Manpower Group, a major recruitment firm.

Mr Hicks said that leaving the EU would create “a vast amount of uncertainty and instability”, which would “threaten jobs and harm Britain’s prospects.” On free movement, Mr Hicks said the NHS was "struggling” to cope with moving to an all-hours services, and EU exit could "further these skill shortages.”

“The only way we can afford high-quality public services is to have a growing economy, and a system that is open to bring in talent from around the world. Business is clear that Brexit would harm these goals. The major recruitment firm Manpower says that Brexit would harm our economy, by putting up barriers to trade and making Britain less attractive to investment. And the fog of uncertainty surrounding the ‘out’ option raises far more questions about Britain’s future than it answers.

“Our NHS depends on foreign doctors and nurses, many of them from the EU. Raising the drawbridge to skilled labour from abroad would squeeze the life out of the health service, at a time when it is facing significant financial pressures.”
(Read more)
Share

June 09, 2015 3:05 PM
As MPs begin the Second Reading debate of the EU Referendum Bill, Lucy Thomas, Campaign Director of Business for New Europe says this discussion is too important to take place in Westminster alone.
Lucy Thomas, Campaign Director of Business for New Europe, said:
"During this debate we heard MPs from right across the political spectrum make the case for Britain's place inside a reformed European Union, and set out the serious risks to our economy posed by a British exit.
"But now that the debate is underway, it cannot simply take place in Westminster alone. It's a no-brainer that our membership of Europe makes economic sense for Britain, and that's why business leaders are ready to speak up for our EU membership, and make the case loud and clear for the UK to remain at Europe's top table.

"The Foreign Secretary is right to say that Europe needs to change, so we now need to push for cutting down red tape, streamlining the institutions and making Europe work better for Britain and the rest of Europe."

BNE in City AM: 'Will Cameron fail to achieve fundamental reform of Britain’s EU membership terms?'

BNE in the Guardian: 'It’s high noon for Britain over Europe. Make no assumptions'

The EU referendum battle is shaping up but politicians can’t take the public mood for granted.

Read here: 'It's high noon for Britain over Europe. Make no assumptions'

Conservatives for Britain need to be honest about their intentions

"It's very well Conservatives for Britain to say they wish David Cameron 'every success' in his renegotiation but they need to be clear about what reforms they support. If they truly support the Prime Minister then if he is successful in obtaining the reforms he aims to achieve then they will support a Yes vote.

"If on the other hand they want to wait until Cameron presents his package and then say he has failed, they need to be honest about that. What are their true intentions?"

BNE in the Times: 'Sainsbury to mastermind pro-Europe campaign'

An influential Labour peer close to Tony Blair has emerged as the driving force behind the campaign to keep Britain in Europe, according to Conservative and Labour MPs. 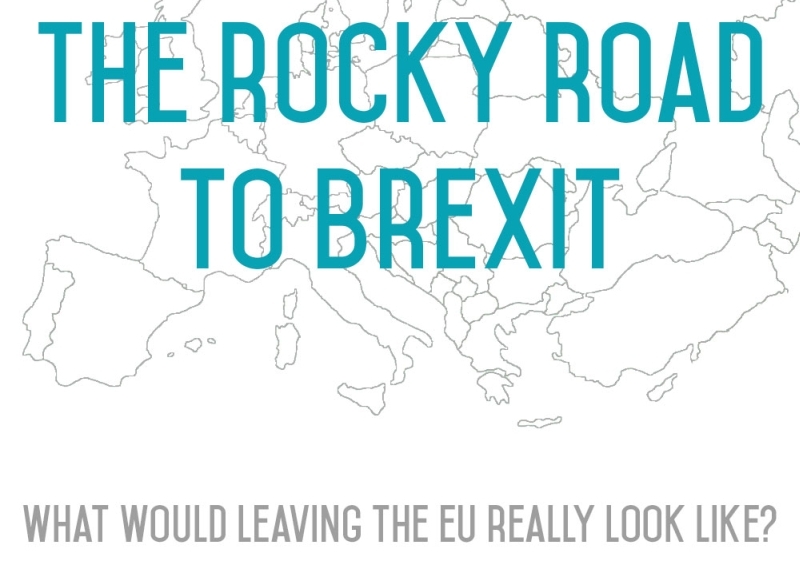 Britain's prosperity depends on trade with Europe. If the UK were to leave the EU, we would have to find a new relationship to help our businesses export to the European single market. But while there is no shortage of predictions about how a different relationship with Europe would impact Britain, most people do not know what this really entails.

BNE takes a look at the three most commonly cited "Out" scenarios and sets out the step-by-step process involved in arriving at them, along with the obstacles and pitfalls that accompany it.

(Click on a banner to see the full infographic)

The government should negotiate like adults, not demand special treatment

"You can either negotiate like adults, finding areas of common ground, or hold a gun to people's heads and stamp your foot."- Lucy Thomas, Campaign Director of Business for New Europe

Eurosceptics are wrong to demand a British veto over all EU laws, according to Business for New Europe. The pro-European business campaign was reacting to the launch of a report by anti-European group Business for Britain, alleging that the government is trying to get Brussels to allow the House of Commons to veto all EU legislation.

"We fully agree with the need to reduce red tape, push for free trade deals and protect non-Eurozone members like Britain. We have allies across Europe on many of the things we'd like to see.

"While Business for Britain have done an admirable job of bringing together the Government's reform proposals, they have been somewhat economical with the truth: the Government has never suggested a UK-only veto, instead a system of red cards for several countries working together. William Hague in fact said a unilateral pick and choose system 'would not work.'

"As for the threat 'change, or go', you can either negotiate like adults, finding areas of common ground, or hold a gun to people's heads and stamp your foot. I think the encouraging noises from other EU leaders after the Prime Minister's recent diplomatic tour has shown that the former stands the best chance of success."